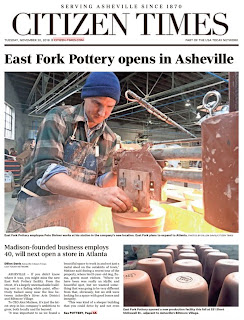 The Asheville Citizen-Times has a front page story today on East Fork Pottery opening in Biltmore Village in Asheville. Here's the start of the story:

If you didn't know where it was, you might miss the new East Fork Pottery facility. From the street, it's a largely unremarkable building cast in a fading white paint, effectively tucked away near the line between Asheville's River Arts District and Biltmore Village.

To CEO Alex Matisse, it's just the latest step in his company's ambitions to grow, both locally and far beyond.

"It was important to us we found a beautiful space to work in and not just a metal shed on the outskirts of town," Matisse said during a recent tour of the property, where his 15-year-old dog, Zuma, greets most visitors. "Where we have been was really an idyllic and beautiful spot, but we wanted something that was going to be very different from that, obviously, but we still were looking for a space with good bones and integrity.

"This was kind of a sleeper building that you could drive by and not even realize it’s there."

Matisse signed on to lease the 531 Short McDowell St. property in late 2017. It is formerly the home of Kenny Pipe & Supply, and is owned by Sea-Nic Enterprises Inc. East Fork gradually has moved in its equipment as well as roughly 40 employees, split evenly between production staffers and its marketing and sales teams.

Using all North Carolina clay, East Fork, which was founded by Matisse on an ex-Madison County tobacco farm in 2009, remains true to its pottery roots, crafting cereal bowls, dinner plates and vases onsite, as well as a number of other products shipped to an array of commercial and home consumers. Its creations can be found at several popular local restaurants, such as chef Katie Button's Cúrate and chef Brian Canipelli's Cucina 24.