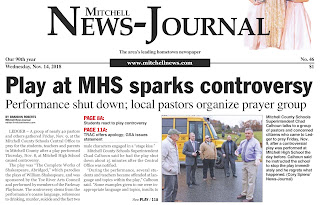 The Toe River Arts Council (TRAC) is at the center of a controversy over the performance of The Complete Works of William Shakespeare (Abridged) at Mitchell High School. The current issue of the Mitchell News-Journal has a great deal of coverage of the story, including a front page story which starts:

A group of nearly 40 pastors and others gathered Friday, Nov. 9, at the Mitchell County Schools Central Office to pray for the students, teachers and parents in Mitchell County after a play performed Thursday, Nov. 8, at Mitchell High School caused controversy.

The play was “The Complete Works of Shakespeare, Abridged,” which parodies the plays of William Shakespeare, and was sponsored by the Toe River Arts Council and performed by members of the Parkway Playhouse. The controversy stems from the performance’s coarse language, references to drinking, murder, suicide and the fact two male characters engaged in a “stage kiss.”

It's not entirely clear what happened during the performance. Statements from the Toe River Arts Council Executive Director Nealy Andrews and Board Chair Dan Barron refer to an “uncomfortable atmosphere" and “inappropriate content.” Here are those statements from the TRAC facebook page (where they were posted without any additional comment or explanation): 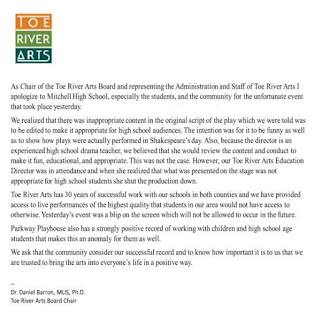 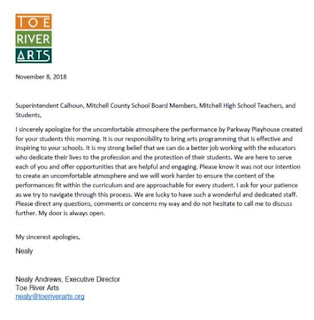 A subsequent email from the Executive Director was equally vague: 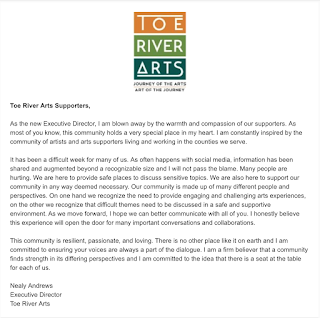 According to one of the actors in the play, students shouted homophobic slurs at the actors. Read an account that includes this here: http://www.artsintegrity.org/worry-about-the-censorship-and-homophobia-first-then-the-prayers/

From the article (Jeff Bachar is artistic director of Parkway Playhouse and Dwight Chiles is one of the actors):

Bachar, confirming Chiles’ account of the suspension of the performance, also pointed out, “What has gone largely unmentioned is the fact that there were derogatory remarks made by a few students towards the actors. These related to being transgender and homosexual.”

Chiles confirms that, writing, “There were a few homophobic slurs and things thrown at us on stage such as when I ran out in my pink tights I heard one student say ‘gay’ and few more said it again during the stage kiss in Romeo and Juliet. Another time is when my character said “trans-global political thriller,” an audience member yelled “tranny,” which doesn’t make sense. As far as I could see there was no action taken by the teachers to stop people from saying things.”

The Mitchell County Gay Straight Alliance, a community gay straight alliance, issued a statement that was included in the Mitchell News-Journal (full disclosure: I'm one of the co-founders of the GSA). Here's how we shared it on facebook this morning:

Our response to the Mitchell High School controversy in the Mitchell News-Journal this morning. Whatever the halting of the play was about, the people praying and petitioning have managed to make homophobia the topic after the fact. We call on Toe River Arts and Mitchell County Schools to make it clear that if there had been LGBTQ people in the play that in itself would not be considered inappropriate content. The gay youth in this county need to hear this from responsible adults. 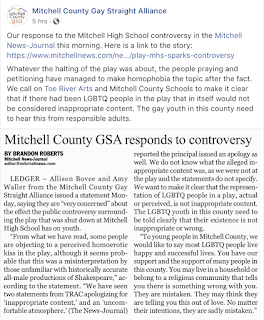 There is a petition circulating that reads as follows (an image of the petition is included in the Arts Integrity story):

We, the undersigned, are concerned citizens who urge our leaders to act now to ban Toe River Art (sic) Council or any other organization from all Mitchell County Public Schools that would promote Homosexuality, Incest, Suicide, or any other that would be contrary to life. We are showing by signing that we support you and stand with you to make this decision.

As a TRAC member, I'm concerned that, via their public statements so far, TRAC is appearing to support censorship in the arts; equating being gay with drinking, murder, suicide and incest - and throwing the Parkway Playhouse actors and director under the bus to boot. (To be fair, the Mitchell County Schools superintendent appeared to throw TRAC under the bus with his statement in the Mitchell News-Journal article above.)

This incident is unfortunately reminiscent of a 2015 controversy involving TRAC, the Mitchell County GSA and the Spruce Pine Town Council: https://ncclayclub.blogspot.com/2015/09/spruce-pine-town-council-trac-toe-river.html

TRAC's handling of the 2015 controversy was disappointing to say the least. Here's hoping TRAC as an organization rises to the occasion this time.
Posted by Amy Waller at 3:42 PM

wow. is Shakespeare no longer required high-school reading? I've seen this show 5-6 times, I'm at a loss to think of what is objectionable in it.

I don't think there is any validity to casting homophobic slurs, no matter what. and tough topics like suicide or murder are ones that high school students need to learn to discuss and deal with in preparation for adulthood. The protesters could also have been referred to a contemporary (1998, anyway) movie titled "Shakespeare in Love" which won Best Picture at the Oscars and clearly showed that, in Shakespeare's day, men HAD to play every role since women were not allowed to act on stage.