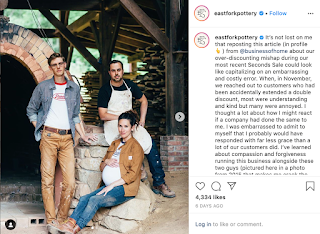 East Fork had tested their process extensively in the days running up to the sale. But the prior evening, late at night, an employee had made a mistake. It was a tiny piece of code, buried deep in the system, but it caused the discount to be applied twice instead of once. “It was an immediate catch,” says Matisse. “They found the problem and took it out. But by that time the damage was done.”

The mistake had been live for roughly four minutes. It affected 2,000 orders, and cost East Fork over $66,000. Four minutes after the double discount was fixed, the sale was over.

The story has a heartwarming ending - read the full Business of Home article here: https://businessofhome.com/articles/a-tiny-mistake-cost-east-fork-66-000-then-customers-started-giving-the-money-back

WLOS covered the story, too: https://wlos.com/news/local/customers-step-up-after-mistake-costs-asheville-pottery-shop-almost-66000