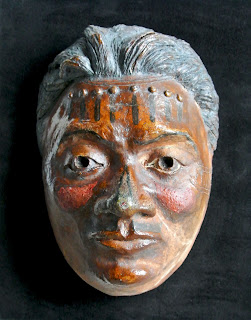 Anita Funston lives in Henderson County and has been recently creating art at the Penland School of Crafts in Penland, NC. Regarding the event, she stated, “It was an honor to represent Henderson County in the State competition and I was thrilled to learn that I was awarded the gold medal.”

Anita qualified for the state competition by winning first place with her sculpture, titled Chief, at The Four Seasons SilverArts competition held in Henderson County on May 7, 2015. “I greatly appreciate how hard The Henderson County Parks and Recreation Department works every year to hold Silver Games and SilverArts; they make it possible for participants to compete locally and qualify for the state competition.“ Funston continued.

For more information about the NC SilverArts competition can be found at http://ncseniorgames.org/arts.htm.

About Anita Funston Artist: Anita Funston creates one of a kind sculptures. She is inspired by nature. Her works incorporate harmony and humor. Her website can be found at www.anitafunston.weebly.com. She can also be reached at AnitaFunston@gmail.com.
Posted by Amy Waller at 9:36 AM