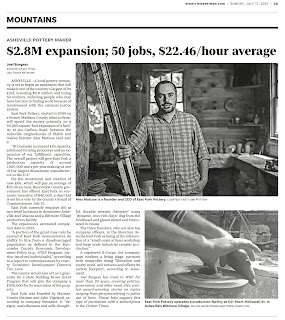 Today's Asheville Citizen Times has the details on East Fork's expansion plans. From the article:

A local pottery company is set to begin an expansion that will make it one of the country's largest of its kind, investing $2.8 million and hiring 50 workers, including people who may have barriers to finding work because of involvement with the criminal justice system.

East Fork Pottery, started in 2009 on a former Madison County tobacco farm, will spend the money primarily on a 30,000 square-foot expansion of a facility at 144 Caribou Road, between the Asheville neighborhoods of Shiloh and Oakley.founder Alex Matisse said July 9.

"(It) includes increased kiln capacity, advanced forming processes and an expansion of our fulfillment capacities. The overall project will give East Fork a production capacity of around 1,000,000 units per year making us one of the largest dinnerware manufacturers in the U.S."

For the investment and creation of new jobs, which will pay an average of $22.46 an hour, Buncombe County government has offered East Fork an economic incentive of $40,000, a deal that is set for a vote by the county's Board of Commissioners July 13.

The expansion's estimated completion date is 2023.

Complete article (with online title "East Fork Pottery to hire 50 at $22.46/hour average, including those with criminal records") here: https://www.citizen-times.com/story/news/2021/07/09/east-fork-pottery-plans-expansion-50-job-openings-hiring-people-criminal-records/7904439002/

Want to post something? Want to be added to our monthly newsletter which details each month's clay club meeting? (different than signing up for blog emails below) Have any questions? Contact Tori Motyl at Tori@MotylPottery.com

Clay Club meets at artist studios and other locations throughout Western North Carolina, usually on the second Wednesday of the month. All potters and ceramic artists are welcome!