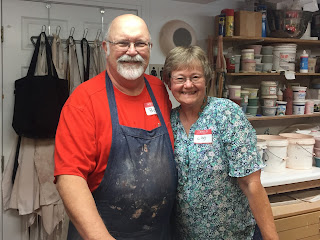 Thanks to Bob Meier, Cindy Pacileo, and all of the Potters of the Blue Ridge for organizing and hosting Clay Club this month at Doe Ridge Pottery Gallery and Studio in Boone! It was great to get to meet potters who live a little too far away to attend our meetings.

Bob is the owner of the Doe Ridge Pottery Gallery and Studio. The gallery includes the work of a number of potters in addition to Bob’s work and is in a terrific location in downtown Boone. Before starting his demo, Bob talked about his career, including a background in drafting that has influenced his ceramic work, and how he and Lucy Hamilton developed a clay body that they sold to Highwater Clays, who now sell it as Highwater’s Brownstone clay body. He shared a number of his tools, including tools he makes by shaping church keys with a bench grinder and Dremel tool (a couple of those are shown in one of the photos).

Bob shared a number of pro tips, including this one: when carving a design on a lamp, start on the back side (the side with the hole for the cord) - if you don’t get it quite right, that side will probably be facing a wall. Another tip: flexible rulers come in handy, and a transparent flexible ruler is even better since it lets you see what you’re working on while you’re using it.

Cindy and Bob shared a call for artists for a pottery and ceramic sculpture show that the Potters of the Blue Ridge are sponsoring at Doe Ridge Pottery Gallery in August - look for details about that here on the blog soon.

Thanks again to Cindy, Bob and all of the Potters of the Blue Ridge! Hopefully we’ll get to do a joint meeting like this again. 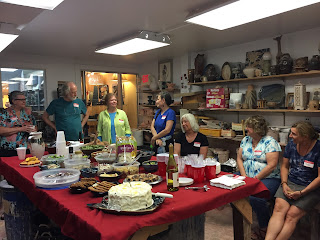 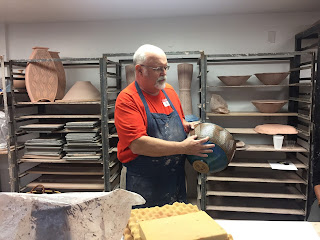 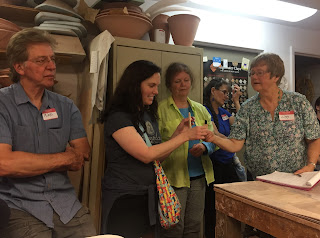 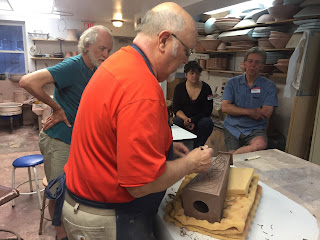 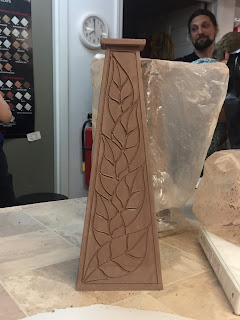 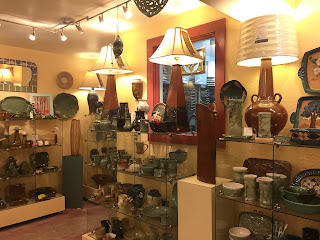 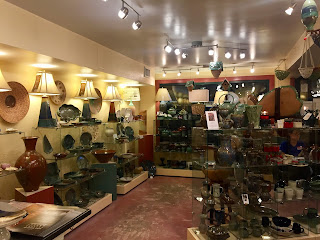