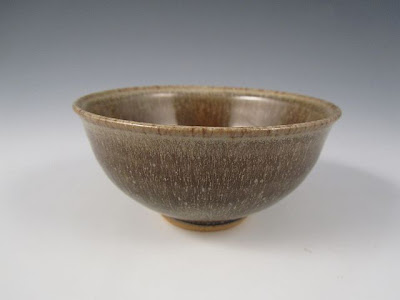 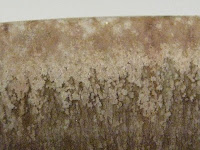 Glaze Drama
Swept Up Off the Studio Floor Glaze

This past summer I took John Britt’s week-long glaze class, aka Glaze Chemistry Boot Camp for Masochists. It was fun and inspiring, leaving us determined to create our own glazes. Upon returning to my studio, I decided to make some of the semi-matte glazes found in Hesselberth and Roy’s Mastering Cone 6 Glazes. The three glazes have the same base glaze and different colorants.

Lesson 1 - If something seems like a dumb idea, check it out before doing it.
John had said that, when mixing dry glaze, to lay it all out on a sheet of paper. John, of course, meant to write out the recipe, but my brain had imploded from all the discussion of chemistry, so I translated his remark to mean laying the dry chemicals on a sheet of paper. It seemed like an asinine idea to me, but I was determined to follow directions and lay out each 5000-gram batch on a sheet of newsprint.

My intuition told me the paper would tear on the way from the counter to the bucket, and it did. The entire 5000 grams of dry chemicals ended up on the floor of my studio. Thankfully, I had not yet added the colorants, so the mess was not as toxic as it could have been. Keeping on my respirator and gloves, I swept up the mess into a glaze bucket. I figured I had nothing to lose by going ahead and mixing it up as a glaze, so I did.

Lesson 2 – Pay attention to the details.
The recipe for Field Mouse Brown called for manganese dioxide as a colorant. I did not realize it came in two different size grits, and I purchased the 80/100. Maybe 5% of it made it through my 80-mesh sieve. After consulting with several more-experienced potters, I decided to add 200-grit in the amount called for.

Lesson 3 – Do not try to test new glazes in a brand new kiln, and don’t make assumptions.
My test tiles looked fine, so I decided to try the glazes on actual pots. In addition to bisque ware I had been hoarding, I had a set of very small, thin bowls. The one in the photo is about 3 inches across at the rim. The cone 5 test cone which had come with my new kiln had come out perfectly in a previous firing, so I assumed the kiln was firing correctly. In reality, it was not even close. The small bowls came out fine, but the larger pieces fired way too hot, and the glaze ran a lot. Thankfully, I had listened to my intuition this time and used extra bisque ware to catch drips.

The new kiln is a whole other story, but it took numerous firings to correctly calibrate the thermocouples. They are now set to 45 degrees more than the factory-set 18 degrees. The cone 6 firing was actually 7+. I like the glaze on this bowl, but only thin, small pieces can be fired with this glaze at 7+. The bowl has some nice striations running vertically, I think from the larger grit manganese dioxide. To get any of these three glazes to look as they do in Hessberth and Roy’s book, I have fired them to cone 5 with a 2-minute soak. They would probably look better fired to cone 5 ½ or with a longer soak .They all run off pots if fired to cone 6. I have not yet figured out why and am open to suggestions.

Lesson 3 – Keep your sense of humor. It is the only thing standing between you and insanity.

when I read that in the book I pictured the exact same thing.
Lay it on paper. seriously! I could not clear that up in my head. I did not do it..but still questioned. nevermind. Is that what he meant write it down. humm?
I recently took John Britts alsmost a week class, it was fantastic! He's the best.
Julie B

Love this, Diane. Thanks.

Nelle, you know in order to make it work right you have to mix it up and then go over to Diane's studio, fling it on the floor, and then sweep it back up. After that, it'll be perfect!

Marian, don't even go there! I might have to start locking the studio.