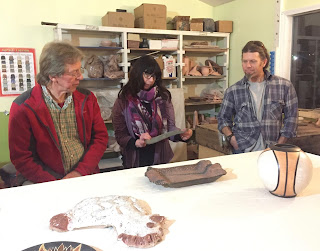 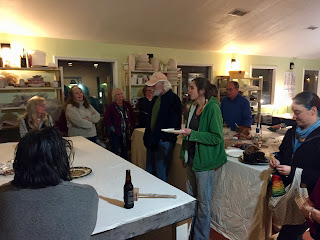 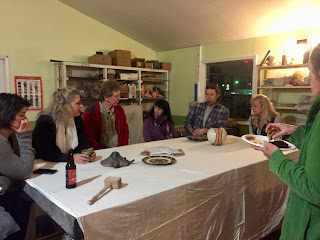 What a great Clay Club! Thanks to Linda Powell for hosting us at High Country Ceramic Arts and to Garold Amsberry, Michael Rutkowsky and Yaffa Todd for leading the critiques and discussion. And special thanks to everyone who shared their work with us - it takes courage to do that and is very much appreciated.

Linda Powell was first with her Speckled Brownstone dish: 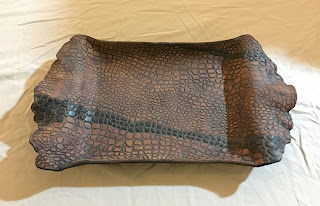 Garold said the lines reminded him of an image of a cutaway of the earth showing the different strata. Michael said he liked how the lines lead you to the handles. Linda had used felt pieces on the bottom to prevent it from scratching surfaces. This led to a discussion of other ways to handle the bottom, such as making individual clay feet (this might require more than 4 feet to prevent sagging, or maybe placing a cookie underneath to support it during firing) or smoothing the surface with silicon carbide or a coarse emery cloth. Here are some posts with advice on smoothing bottoms:

(and a useful post by John Britt on smoothing lid flanges)

John Maddox shared his Pig Bear which he hand built on a hump mold: 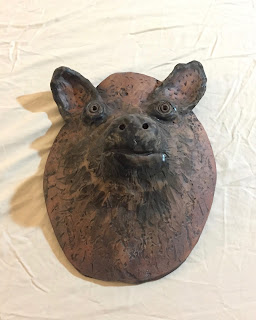 He made the eyes (they are wonderful!) with an old ginseng bottle. Someone asked about his inspiration and John said, “I don’t know where these marching orders come from sometimes.” Michael said that being ambiguous gave the Pig Bear more character. John designed it to hang and there was some discussion of how to make pieces ready to hang. Adhesives were discussed; Joy Bennett said she uses E6000 and Bridget Fox recommended PC-7 or PC-11 two-part epoxies. Michael advised that when it comes to designing a piece to hang on a wall, it is better to overkill on that for buyers.

Karen Miller was next with her rooster egg platter: 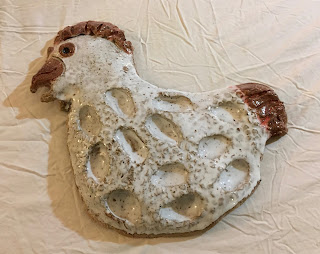 She said she was laughing with her piece - and looking at her delightful platter it’s easy to see why! Yaffa suggested that it might be nice to make it so it could hang and be displayed in addition to being functional. Bridget Fox suggested designing it so that it could hold a plastic baggie of ice underneath to keep the eggs cool. Yaffa talked about the edges which she said were sharp in places. She suggested working on edges in the leather stage to make sure they’re smooth. 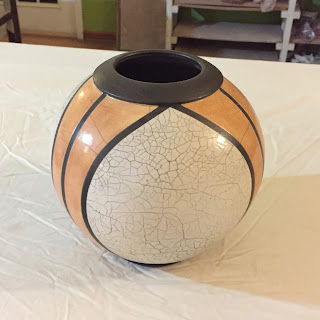 He talked about how he made it, including using masking tape to mask areas to make the black lines on the pot. Sarah House suggested using pinstripe tape (available from auto supply stores) because it’s easier to make curved lines with that. Yaffa said she liked how the lines follow the piece. There was some discussion of the foot and the rim. Garold suggested possibly trimming the foot to mirror the rim.

Yaffa said it was a gift that Martin can throw any form he wants. This led to a discussion of clay bodies and how they differ in terms of throw-ability. Martin said throwing with raku clay is much easier than other clay bodies and is good for learning to throw. Some folks mentioned changes they have noticed in Highwater clay bodies that have affected their throw-ability. We talked about other options available locally, including Standard clays carried by Highwater, Laguna clays sold by The Village Potters and STARworks clay (not available locally, but a number of Clay Clubbers put in a joint order after the STARworks Clay Club presentation).

See more of Martin's work on his website: tinroofpottery.com 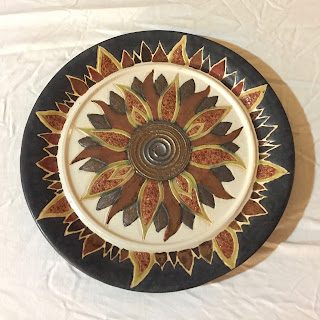 Yaffa said it was a beautiful plate and that the detail took hours to do. The texture of the brown breaks up the design. (Click on the image to see this better.) Someone asked whether the glazes are all food safe, and they are. This led to a discussion of the piece being both functional and decorative and what price it might fetch. Kari Weaver of OOAK Gallery talked about how her customers look for functional items vs. how they look for decorative items. Someone suggested making it a little larger, with a hanger, and that that might increase the price.