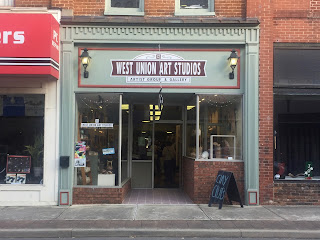 Adam will give a large platter throwing demonstration and lead a group discussion on being in a shared cooperative space.

Here's a little about West Union Art Studios from their website:

West Union Art Studios, LLC is a group studio, gallery and music education program in downtown Morganton, North Carolina. We opened in November of 2014 and have been serving the community since through donations to local non-profits, giving of lessons, and the renovation of a historic building in downtown Morganton. We have multiple art studios consisting of working potters, painters, fiber artists and music lessons. Resident artists rent studio space to work in, or use as personal display space, and help keep the gallery open. In our gallery we showcase work from the artists and participants of the Signature Day Program of the Enola Group consisting of paintings, drawings, embroidery, and ceramics.

West Union Art Studios is a central hub of art activity in the heart of downtown Morganton.

We’ll have our usual potluck, so bring food and drink to share.

West Union Art Studios is located at 113 West Union Street in Morganton. Google maps will get you there: https://goo.gl/maps/pS96ymYhEofAnams8

See you next Wednesday!
Posted by Amy Waller at 8:32 AM

Want to post something? Want to be added to our monthly newsletter which details each month's clay club meeting? (different than signing up for blog emails below) Have any questions? Contact Tori Motyl at Tori@MotylPottery.com

Clay Club meets at artist studios and other locations throughout Western North Carolina, usually on the second Wednesday of the month. All potters and ceramic artists are welcome!