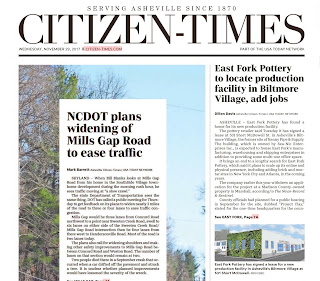 From the story on the front page of today’s Asheville Citizen-Times:

East Fork Pottery has found a home for its new production facility.

The pottery retailer said Tuesday it has signed a lease at 531 Short McDowell St. in Asheville's Biltmore Village, the former site of Kenny Pipe & Supply. The building, which is owned by Sea-Nic Enterprises Inc., is expected to house East Fork's manufacturing, warehousing and shipping enterprises in addition to providing some multi-use office space.

It brings an end to a lengthy search for East Fork Pottery, which said it plans to scale up its online and physical presence, including adding brick and mortar sites in New York City and Atlanta, in the coming years.

The company earlier this year withdrew an application for the project at a Madison County-owned property in Marshall, according to The News-Record & Sentinel.

County officials had planned for a public hearing in September for the site, dubbed "Project Clay," slated for the one-time headquarters for the county’s maintenance department. East Fork CEO, potter and owner Alex Matisse told the The News-Record & Sentinel he had worked for months with county officials to bring the project to Madison, but pulled out after "an alternative came across our radar that was too good for us to pass up."

(Read the earlier article from The News-Record & Sentinel that's mentioned in this article here: http://www.citizen-times.com/story/news/madison/2017/10/02/project-clay-falls-pieces/717490001/)
Posted by Amy Waller at 8:56 AM