Word of the Day- Crawling 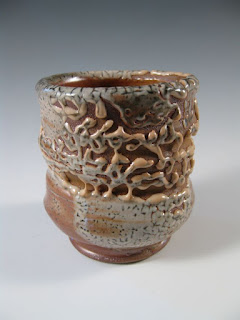 Crawling: also known as ruckling, butterfly, rolling and curdling - Condition of the glaze that pulls away from areas of the pot, leaving areas of bare clay body.

Parmalee  lists Butterfly as "larger thickened patch which sometimes appear a though a small portion of the glaze has folded back on itself   Curdling and rolling are good descriptive terms for characteristic appearances and "parting cracks" describes very well the frequently observed mild form of the fault. Beading is the extreme type."

Sometimes called "skip" - as in "the glaze skipped".

I have heard pottery collectors and dealers, especially antiques, refer to small areas of crawled glaze as a "skip".