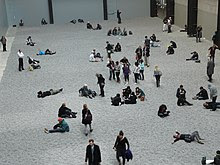 Obviously I haven’t communicated well so let me take another run at it. The question was Why can’t we just be called potters, painters, sculptors, etc.? Why does it seem everyone today want to be called an Artist? This was my contention. Maybe I am wrong but that is my impression. I ask, “What is wrong with being a potter”?

There have been a bunch of definitions of artist thrown out such as – An artist is someone who makes art -which is not the definition I was hoping for. So maybe it is my problem. I need to explain it better.

Perhaps a real example of an Artist with a Capital A is necessary. I certainly know that there are children’s art, good art, bad art, art supply stores (where you presumable get stuff that will end up being – art- when you are finished. How would it be otherwise asked Candide?)

It is kind of similar to people who say that they GOLF. What that usually means is that they want you to think that they golf and are in the same category as Tiger Woods or Rory, etc. They certainly never want to say I suck at golf. They just say they golf. But when you get out there with them on the golf course you find out that they have a 120 score for 18 holes. Tiger Woods could beat them using just his shoes to kick the ball. They will back track once on the course because it is will soon be obvious. But without the actual playing of the game --they let you fill in the blanks – which means that they want to participate in the “Golf” mystique. The wealthy, talented, sophisticated, well dressed, manicured Country Club, player, etc.

It seems to me the same is true with people who say they are Artists, when we know they are potters or painters or sculptors. Why do they say this? Because they too want to participate in the mystique of the (capital ) Artist not the small “a” artist.

An example of a capital “A” Artist would be Ai Wei Wei. It would be inappropriate to call him a potter or sculptor. Let’s take the Sunflower Seeds. You can read about it here: http://www.aiweiweiseeds.com/about-ai-weiweis-sunflower-seeds

But in short (not doing it justice) the work as about 100,000,000 sunflower seeds made of porcelain and fired, and all poured into a thick layer on the floor of a large gallery. So it was about a foot thick and when you would walk on it you would hear the grinding of the seeds and a dust would come up (probably toxic from silica dust and manganese). This represented the sunflower in Chinese culture with all the smiling faces following the emperor as he crossed the sky. It was made by workers in the porcelain factory in their off time to supplement their pay as their jobs were going away. It represented the toxins of the life in China’s industrial society. And on and on.

So to me that is an ARTIST. The work transcended the material. Not at all in the category of artist (small “a” ) who may make 1000 cups with various decals, printed on a copier with appropriated imagery, pressed on to represent the modern hipster who drinks coffee while checking his Facebook on his I pad . Nothing wrong with potters who do this – I do it too!- nothing wrong with hipsters at Starbucks checking Facebbok-- I go there too--but that is not a capital “A” ARTIST. That is potter!

X is a work of art if and only if (1) x is an artifact and (2) x is discussed in such a way that information concerning the history of production of x will direct the viewer’s attention to properties which are worth attending to. 3. x exerts (does not exert) influence on artists.  (--Marcia Muelder Eaton)

It isn’t just an object but an artifact. It is presented in many museums, countries, talked about over all media, etc. It points to meaning beyond itself and calls attention to huge culturally significant things, exerts influence, etc.

Perhaps I am wrong but I appreciate the discussion Carter Gillies. You get the last word!