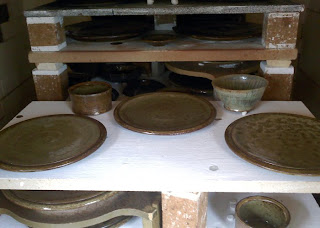 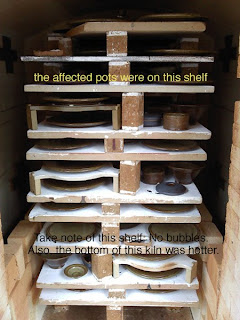 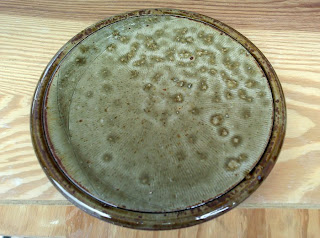 Ok clubbers. Here's a query for you. I have been using the alkaline ash glaze pictured above for about two years now. Roughly a year ago, I started struggling with TWO of my ash glazes. They were both, all of a sudden, bubbling/boiling, pin holing and blistering. This mostly affected my plates and the interior of bowls. (For reference on the severity of the issue, I once lost all 22 plates I had in a firing to it.) I have tried just about everything to fix it! However, the really really perplexing thing is how absolutely RANDOM this blemish is. It does not happen strictly in the hot or cold spot, it's not strictly in oxidized or reduced spot, it's not strictly on the top or bottom of the kiln, it's not strictly on the left or right. HOWEVER, it can affect one plate on one side of a shelf, and not another plate on the other side of the same shelf! This is actually a frequent occurrence. All three plates on the shelf pictured above are the same glaze and as you can see, the one on the right really took one for the team. These are boiling clusters of bubbles. I thought this shelf of pots was a great example because the one in the middle has just a few on it and the one on the left was spotless.

So, I thought it was the clay and bisqued hotter and slower. Nothin. I thought it was a thickness of application. Nope. I thought it would help to refire. Uh uh. I thought it was an over firing problem and fired cooler. (www.sadtrombone.com). Also, for a while I really thought it was happening in the cooling because it seemed as though the plates with the shelves directly above them (meaning having a kiln post the height of the plate) got less bubbles. But, as you can see, the shelf with this affected plate has a bunch of space above the plate, but so does the shelf a few rows below it... and all three of those were great.

Now, I am pleased to say that the firing I unloaded yesterday (that these pics were from) was a huge success. Out of 70 plates in there (I was back ordered!) I had only 4 fail. What did I do, you ask? I washed my ash. Also, thanks to John Brits help, I have been lengthening the end of my firing each time and, this firing took 7 hours between cone 6 and cone 10 (11s were down in the front, as usual). In previous firings this lengthening tactic seemed to be a promising avenue to explore. Now, there is a chance that this firing was a fluke. It may have been packed tighter with all shelves and plates (therefore cooling slower?? Maybe??). But maybe not, only my next firing will tell.

However, the question still remains... what the heck happened to the pot on the right side of that shelf?! did it do some thing wrong in a former life? The other pots in the firing that bit it were in the back two stacks, at random heights in the kiln.

So, if you want, chew on that for a while and let me know what you think!
Posted by Lindsay Rogers at 8:34 AM

I'm thinking your glaze in the bucket is not mixed well or settles somewhat between applications. I have had some glazes that I needed to stir/even sieve in the middle of glazing lots of pieces.

Hi Judy. Yep... I forgot to mention that one. I stirred each glaze with a drill about every 3rd plate I glazed. So strange right?!? I have never re sieved though. That's an interesting idea. This was a new batch of glaze for this firing, so it was recently sieved. I wonder if resieving the glaze before each firing would help. I may try that. Thanks!

Sounds like you're doing all the right things. Slowing the firing from the time the glaze begins melt to maturity is a huge help. It keeps the violent bubbling down and helps settle the bubling at the end.
Do you have any suspenders, like a 2% epsom salt addition and/or a couple percent of bentonite or V Gum to prevent the mixed glaze from settling too rapidly?
Have you placed a lot of cones in those critical spots as well, to compare the temperature variations at different stages of the firing?
I always re-sieve my glazes through about a 60 mesh screen before each firing. When I first batch glazes I use a finer mesh when I first mix glazes either 100 or 200 depending on the glaze.

I have a slightly different theory... reduction. If everything you have below the bagwall is not bubbling, then in all likelyhood the work that is above the bagwall is getting an earlier reducing flame. Most of us dont have a pyrometer top middle and bottom of our kiln, but if you did, I would wager it would be a good deal colder on the bottom.

So... how can this be problematic? If your ash glaze begins to sinter and flow BEFORE the carbon crap has been completely burned out of your bisque, then you get pinholing. This is not happening on the bottom because it doesnt sinter over for probably at least another 20-30min after the top.

This would be my best guess after looking at the image of where the bubbling occurred in the stack. (Great idea by the way... very informative!)

Good luck and keep us posted.

Ash glazes often do not do well if they are old . Mixing new each time may help .

70 plates! Wow, get on it. I have no idea regarding the glaze. I stick to slips. The reduction theory sounds interesting.

Thanks for all the comments! June, no i don't have anything in there to keep the glaze in suspension. Also, there are 6 spies in my kiln... so i make 6 cone packs for each firing. Typically, the front is about a cone hotter than the back and, often, the bottom is a little bit hotter than the top. Which brings me to Alex, I have kind of wondered if reduction may have something to do with it. Because of the quirkiness of the kiln I use, reduction is probably the variable that can fluctuate the most from firing to firing. However, the bubbles are never confined to one location in the kiln (or at least not that i have noticed). They can be all over the place. Hmmm... Well, I'll let y'all know if I come up with anything else after my next firing. Thanks for all your thoughts!

Check out this link. It may give you some additional clues as to what is causing and how to correct the problem:

i agree with alex about the reduction issue and also cynthia about the old glazes...soluble materials in the glaze could be part of the problem, so mixing fresh would have everything in place for glaze application.

one more ingredient in this heavy, heavy soup: doug dotson was having trouble with his soda surfaces bubbling, especially with slips and glazes, he pretty much solved the problem by dusting off and washing off with water before every new firing the undersides of his shelves which helped a whole, whole lot. for him, it was built up soda and silicon carbide dust falling onto the pots. for you, it could be a build-up of alkaline materials or some other grodu that may or may not be evident without attention. you may want to throw this into your long, long checklist of "things to do to get a non-bubbly ash glaze"

i suspect the culprit is the ash, are u burning the wood yourself, whats the source, etc. i always found ash glazes to be a bit finiky when it came to translucent glazes, do your other ash glazes do this? When i was working with ash glazes i had a similar problem and someone told me to wash the ash which i never did. and i never did, just was to much work for a glaze i could achieve elswise.
good luck