Word of the Day - KILN 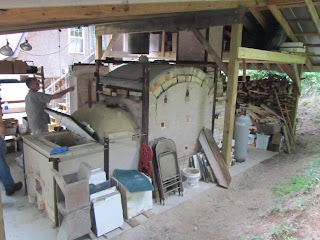 noun:
an oven, furnace, or heated enclosure used for processing a substance by burning, firing, or drying


"Kiln" has been a part of the English language for over 1,000 years, its first known use in Old English (as "cyline") dating back to the early 700s. Unlike many words that descend from Old English, however, "kiln" is not ultimately Germanic in origin but was borrowed from Latin "culina," meaning "kitchen," an ancestor of the English word "culinary." In the 14th century, speakers of Middle English began to drop the "n" at the end of the word, and even to this day some English speakers pronounced "kiln" so that it rhymes with "mill." In fact, like "kiln," "mill" (from Late Latin "molina") was originally spelled and pronounced with a terminal "n." Unlike "mill," however, "kiln" has retained the final "n" in spelling, if not always in pronunciation.
Posted by John Britt at 9:43 AM

Thanks for the history lesson!