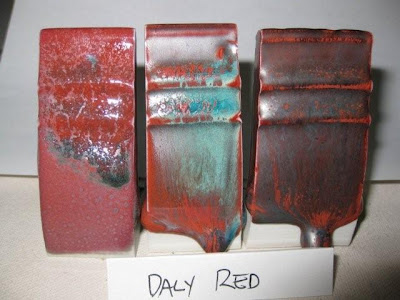 Yo,
Just did a third firing of the Peach Bloom Series and got some interesting tiles.

These are all the same glaze batch (Daly Red) just in different firing cycles! 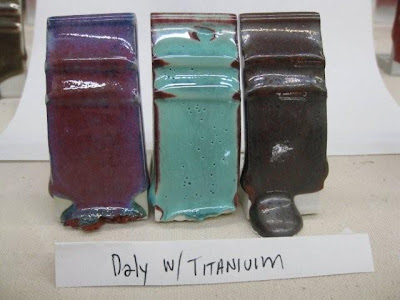 And this series is the same glaze ( Daly with Titanium ) in three firing cycles.

Lindsey Elsey and I still have 3 or more firing cycles to finish before we make any determinations on cause and effect.

The only thing we know..Firing Matters.
We will be writing it up for an article in September.

What cone is this? And are you talking about ramp/hold changes??

We fired these to cone 10 but will fire to cone 9 and cone 11 to see what that does.

We are also firing in various reduction and soaking cycles.

Thanks John. The tiles look great. It's amazing what heat/soak work will do even in oxidation. I am working on a ramp/hold/soak cycle for low fire now -- trying to create a more matte surface. I'm getting good results.